Jack tells the viewers that his brother Stephen's World of Warcraft account has been deleted by their mother, and that he is freaking out. Jack runs into Stephen's bedroom, places his camera in the corner of the room, and runs out of there while laughing joyfully. Stephen walks into his room, slams the door shut, walks around for 2 seconds, and frantically wiggles around on his bed while freaking out and screaming. Slamming himself into the bed twice while making even more sounds, he covers himself with his blanket, yelling about himself running away and never coming back. He pulls the blanket off, then walks into his bedroom closet, walks back out, and frantically wiggles on his bed while screaming, before taking a remote and shoving it right up to his butt. He breaks down, then slams a shoe on his head several times. He then does more frantic wiggling while squealing like a pig, until finally his father yells out, "Dude, shut up". Stephen gets up, punches his bed, and calmly walks out of his room. Jack runs up to the camera and retrieves it while laughing about what just happened. 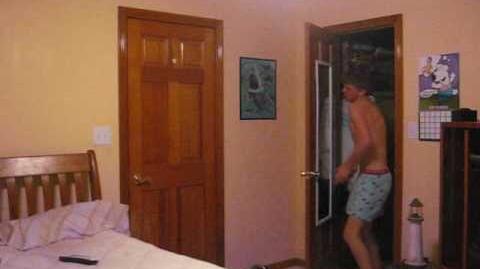 Greatest freak out ever (ORIGINAL VIDEO)
Add a photo to this gallery
Retrieved from "https://greatest-freak-out-ever.fandom.com/wiki/Greatest_freak_out_ever?oldid=24310"
Community content is available under CC-BY-SA unless otherwise noted.