Stephen was cooking his food and he didn't want his brother to the kitchen and he's cooking himself. Jack will not get service, because only Stephen can do his own food. Now, Stephen tries to ask his brother to say "GO AWAY!! IT'S MANICOTTI WITH CREAM CHICKEN AND ARTICHOKES!!" his food was cooking, he make art with anyone. Unfortunately, Jack needs to get out of the kitchen, he shouldn't touch the chicken until Stephen says "STOP... TOUCHING... MY... CRAP!!" and now Stephen threw an egg at Jack and he's out of there. 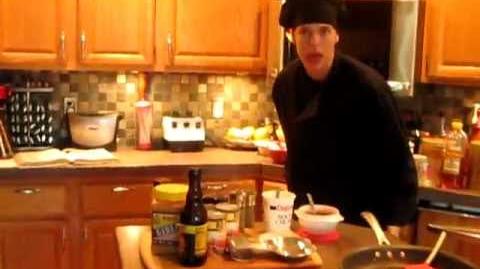 Greatest freakout ever 16 (ORIGINAL VIDEO)
Add a photo to this gallery
Retrieved from "https://greatest-freak-out-ever.fandom.com/wiki/Greatest_freak_out_ever_16?oldid=24110"
Community content is available under CC-BY-SA unless otherwise noted.