Stephen was cooking after school, her mother was mad and Stephen will clean it up the kitchen until he says "GET OUT OF MY FACE!" Stephen was staring at Jack's camera. Now Stephen's doing wrong to throw pans outside the yard but he doesn't do it right, he supposed to put in the dishwasher and he made a mess from in the kitchen and instead of putting the stuff in the dish washers he put in the yard. David was back he also see what's Stephen doing, he threw the toaster outside, David will chase with Stephen and Jack was laughing when he says run. 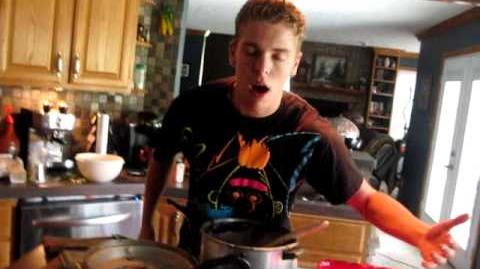 Greatest freakout ever 17 (ORIGINAL VIDEO)
Add a photo to this gallery
Retrieved from "https://greatest-freak-out-ever.fandom.com/wiki/Greatest_freak_out_ever_17?oldid=24147"
Community content is available under CC-BY-SA unless otherwise noted.