Stephen gets his 3rd ticket and gets his car taken away.

Jack starts the episode by explaining that Stephen got a speeding ticket for the 3rd time in six months and his parents are really angry and are going to take his keys away. Jack then films from upstairs while Stephen argues with his parents about the speeding tickets and how fast was he driving at. They complain that they will lose everything like their insurance due to the speeding ticket charges which are very expensive and they tell Stephen that he has to ride the bus, but Stephen refuses to ride the bus and says that the students who ride the bus are nasty, after which David retorts back at him calling him nasty in return. While David says "What kind of dumb*** gets three tickets?" twice, Jennifer then asks where his keys are so she can take them away and won't let Stephen go anywhere, but Stephen refuses to tell her. After David and Jennifer tells him he will ride to bus to school again, Stephen goes furious yelling "I DON'T CARE!!!" twice, David gets mad and tells Stephen to go up to his room as punishment, because Stephen is being very stubborn and defiant by not listening to them and giving his car keys to them. Jack then runs excitedly in to Stephen's room to see what he does. He puts the camera down on his drawer and runs out excitedly, Stephen then storms in telling Jack to get out of his room and yelling "No, I don't care if you want them, you can't have them!" to his parents. Stephen then trashes his room by ripping off his band posters, lifting up his mattress, throwing a chair and kicking it, throwing his bean bag chair and takes off his sweatshirt. After trashing his room, Stephen yells again telling his parent that they can't take his keys away because he's 18 years old (even though he is displaying a 3 year old childish behavior) He then angrily storms out of his room. Jack comes in laughing in excitement at the mess his brother made, he then goes to the garage and finds Stephen using their mom's scooter. Stephen then flees on the scooter, but falls on the grass, and stomps it. Their parents then run out of the house yelling. Then David starts chasing Stephen. Jennifer then tells Jack to turn the camera off and confiscates it, ending the episode. 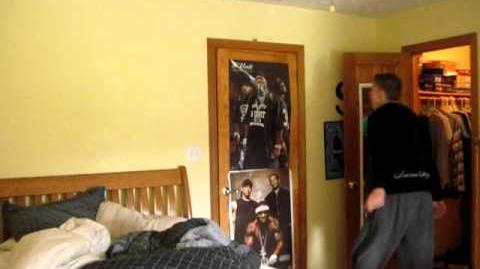 Greatest freakout ever 19 (ORIGINAL VIDEO)
Add a photo to this gallery
Retrieved from "https://greatest-freak-out-ever.fandom.com/wiki/Greatest_freak_out_ever_19?oldid=24205"
Community content is available under CC-BY-SA unless otherwise noted.