Stephen wants to Catch Fish on a Sightseeing Tour

Jack was sitting down on the boat, when he's at the Bahamas on Bahamas Water Tours for a Family Vacation. Unfortunately, Stephen was acting up all time in this Water Tour but there's two black males as captains. When the captains show Stephen the fishes, Stephen said he wanted to catch them but the captains refused to let Stephen catch them because they are protected species. After Stephen gets upset on this tour such as not being able to catch the fish and the music playing some reggae and wanted some rap music to play but the Captains deny his request and try to make Stephen calm down by offering him a bottled water but Stephen didn't want on. After many attempts to get Stephen to stop with his behavior they tell Stephen that there is no police on the tour and David points out that the black male was the captain and he needs to listen to him until Stephen was mocking his father to say "Oh, he's the captain on his 20 foot boat." The Captain soon loses his patience and tells Stephen to take his time (more like to behave himself) or leave the boat. Stephen wonders what does he mean by leave the boat and the captain topples him of the boat into the water and David jumps in the water as well to get Stephen out due to him not being able to swim with Stephen yelling "THAT BASTARD PUSHED ME!" and Jack was laughing for whole time. 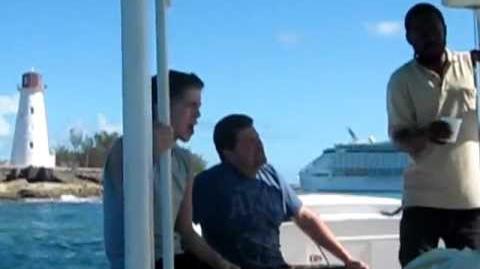 Greatest freakout ever 20 (ORIGINAL VIDEO)
Add a photo to this gallery
Retrieved from "https://greatest-freak-out-ever.fandom.com/wiki/Greatest_freak_out_ever_20?oldid=24168"
Community content is available under CC-BY-SA unless otherwise noted.