It's time for Stephen's Sister to go home.

This is a 3rd day his sister and her family being over aren't to get. Brandi still packing Stephen's stuff, they just going downstairs couldn't never know until Charlie called Stephen says "Calm down. Calm down you little punk." they cannot understand when Stephen shoved his remote up his butt in "Greatest freak out ever". Stephen doesn't know who she is when she sitting on the chair with the arcade, her name is Jane and she says "I'm Jane! And you're the person that shoved the remote up your butt!" Stephen yells until Darrick says "And what the hell's your problem, man?" Stephen knows to tell him to get out of his face and Darrick cussing him says "I'm sick of your spoiled bulls***, man!" and Stephen running out of his house and Darrick was running to say "I'll tell you what buddy, you're done!!" and they just had running outside and there they goes. 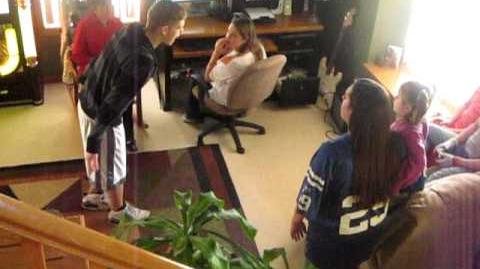 Greatest freakout ever 22 (ORIGINAL VIDEO)
Add a photo to this gallery
Retrieved from "https://greatest-freak-out-ever.fandom.com/wiki/Greatest_freak_out_ever_22?oldid=24203"
Community content is available under CC-BY-SA unless otherwise noted.