Stephen has a new hobby.

Stephen picks up an odd hobby; being obsessed with Batman, his shirts and toys he collects is just that. Jack knows about the batmobile and decides to go have a look at it; driving the go cart down to the other garage where Stephen is at, he's doing mechanic as Jack notices that the car doesn't have seats, Stephen states that he doesn't have them yet and tells Jack to leave. Jack then notices a switch on the car's dashboard and starts to mess with it, only to accidentally eliminate smoke from the hood. Stephen shouts "OH, MY GOD! WHAT HAVE YOU DONE?!" and then starts chasing after his laughing brother into the grass. 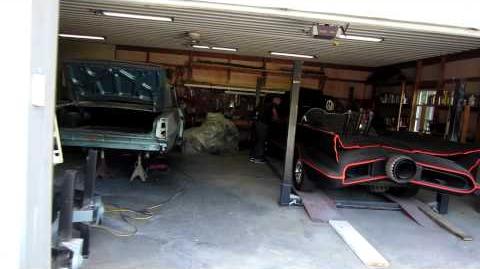 Greatest freakout ever 23 (ORIGINAL VIDEO)
Add a photo to this gallery
Retrieved from "https://greatest-freak-out-ever.fandom.com/wiki/Greatest_freak_out_ever_23?oldid=24150"
Community content is available under CC-BY-SA unless otherwise noted.