STEPHEN SELLS HIS CAR TO TAKE THE BATMOBILE TO COMIC CON

Stephen is getting into an argument with David and Jennifer over the fact that he sold his car to take his batmobile to Comic-Con. David asks what Comic-Con is, and when he finds out it will be in California, David freaks out and tells Stephen that he isn't going anywhere, saying that the Batman show is "Stupidest s***." Finally, Stephen says "I'm going to Comic-Con!" and David goes to chase after Stephen and kick his butt. Jennifer finds that Jack was recording the whole thing, and she confiscates the camera and turns it off. 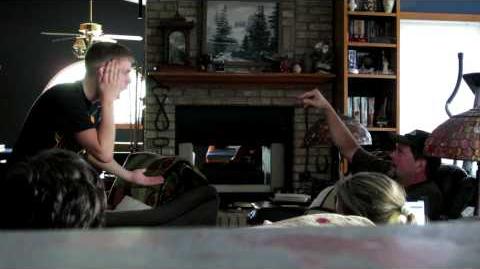 Greatest freakout ever 24 (ORIGINAL VIDEO)
Add a photo to this gallery
Retrieved from "https://greatest-freak-out-ever.fandom.com/wiki/Greatest_freak_out_ever_24?oldid=24104"
Community content is available under CC-BY-SA unless otherwise noted.