Stephen refuses to be in a parade ~ on a very windy day.

Stephen refuses to be on a parade float with a bunch of little girls because he thinks parades and floats are gay. After some attempts by his parents to get him on the float, Stephen proceeds to damage it and scare the little girls off the float as his way of his parents saying he will cooperate being on the float without his permission. Then Chase's Mom comes and stops him for causing more damage to the float. She asks Stephen where his mother is, and when Stephen calls her "old", she finds it very offensive to and responds by yelling "And you're crazy, GET OUT!" She and Stephen get into a argument how Stephen damaged the float and the scared the girls then Stephen yells at her to get out of his face then slaps Stephen in the face, causing Stephen to run away and escape. 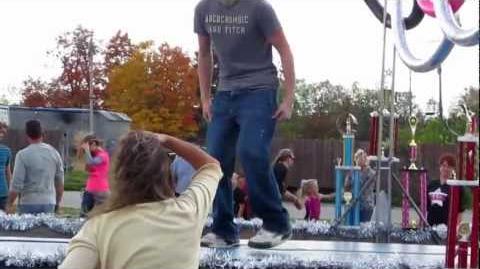 Greatest freakout ever 25 (ORIGINAL VIDEO)
Add a photo to this gallery
Retrieved from "https://greatest-freak-out-ever.fandom.com/wiki/Greatest_freak_out_ever_25?oldid=24156"
Community content is available under CC-BY-SA unless otherwise noted.