Stephen's listening to the Gangnam Style for the last 3 weeks, he keeps doing the dance I hope he must be able to stop dancing at the computer until Stephen turns around to see what's Jack is doing when he says "Dude! What the heck?!" Now, Jack always filming at Stephen to stalking as harassment until he says "You're a freakin' stalker!" Stephen was chasing with Jack and Stephen got trip over to the chair until Stephen says "YOU THINK YOU'RE A YOUTUBE COMEDIAN?!" He was saying mom to yelling and he wasn't crying, he was screaming louder but that's not fair, but Stephen tells Jack to say "YOU'RE... A GODDAMN, I HATE YOU!!!", and Jack is going back upstairs. 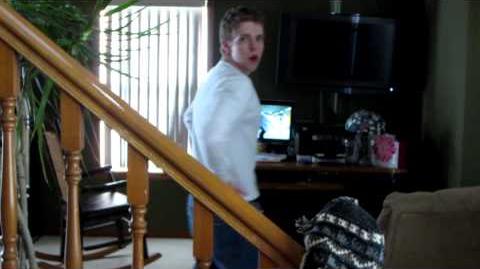 Greatest freakout ever 27 (ORIGINAL VIDEO)
Add a photo to this gallery
Retrieved from "https://greatest-freak-out-ever.fandom.com/wiki/Greatest_freak_out_ever_27?oldid=24151"
Community content is available under CC-BY-SA unless otherwise noted.