"Greatest freak out ever 28" is a Greatest freak out ever episode from season. In this episode, after getting into an argument with his mother over the fact that he quit his 3rd job, and that Jack was recording them arguing the whole time, Stephen freaks out and destroys Jack's old TV set by throwing it on their driveway.

Stephen quits his 3rd job while continuously complaining about how sucky everyone is from his jobs. He is playing a video game while his mother Jennifer continues to rant and then notices, shutting off the computer as Stephen falls off his computer chair and then sees his brother filming everything.

Stephen promptly goes upstairs to Jack's bedroom and gets Jack's TV to take outside with him. Stephen threats Jack to shut off his camera or else he'd throw the television. Jennifer then threatens Stephen saying if he throws Jack's TV he will be grounded from his car, but Stephen says he doesn't care because he never goes anywhere. Stephen then tells Jack that if he doesn't turn off the camera he will throw his TV, but because Jack is still filming and lies to Stephen that he has turned off the camera, this prompts Stephen to say "NO, IT'S NOT YOU'RE STILL FREAKIN' HOLDING!" before throwing Jack's TV on the ground as Jack reacts toward the incident: "NO, STOP! OH, MY GOD! Oh, my god!". Stephen heads back inside with his parents watching and Jennifer saying his car is gone, leaving the desolated Jack (still filming) behind. 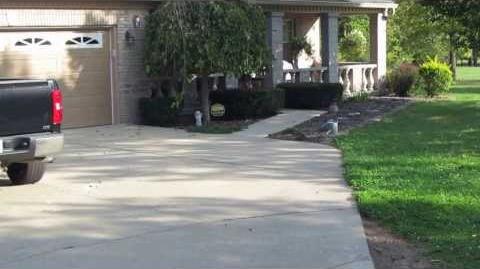 Greatest freakout ever 28 (ORIGINAL VIDEO)
Add a photo to this gallery
Retrieved from "https://greatest-freak-out-ever.fandom.com/wiki/Greatest_freak_out_ever_28?oldid=24155"
Community content is available under CC-BY-SA unless otherwise noted.