Just another day at the pool.

Paige has been complaining about her tooth all day and Stephen starting to get really angry at her. Stephen utterly screams nonsense at her and eventually "Stop screaming me!" while Paige repeatedly shouts at him "Shut up!" and Stephen replies "No! I'm not gonna shut up! You've been screaming for an hour! Everyone's sick of it!" then he asks to see the tooth prompting him to aggressively attack Paige and rip her tooth out; placing it aside as Jack continues filming the noticeable splotch of blood on the pool's concrete.

Brandi hops in the pool to stop Stephen's actions even ripping his goggles off. David tries to stop Brandi form attacking Stephen while Jennifer checks her grandniece to see if she was okay as Stephen gets out of the pool. Paige is taken out of the pool all upset while Stephen still rants about how he's sick of the family and tells his sister: "You're a B-word and I just don't like you!" and tells Jack to "Screw off!" and he then goes inside the pool shed and then proceeds to bang his head on the glass door as the video ends. 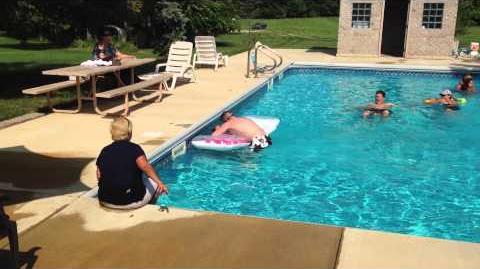 Greatest freakout ever 30 (ORIGINAL VIDEO)
Add a photo to this gallery
Retrieved from "https://greatest-freak-out-ever.fandom.com/wiki/Greatest_freak_out_ever_30?oldid=24223"
Community content is available under CC-BY-SA unless otherwise noted.