For the past month when Stephen is selling his family stuff, he takes random items around the house to become prepared at the swap-meet. Stephen saw Jack filming and accused him of harassing him when he says "DUDE, that's freakin' harassment, man. THE FREAKIN' LICENSE PLATE!" and Jack doesn't even see a license plate. Jack tries to open the sniper rifles case he needs to stop putting it his hands on it but that's not his, that's probably David sniper rifles case, the other one that's Jennifer's bongo drums and Jack's unicycle. He'll get a twice as much money, when Jack says "You can't just sell your family s*** like that." He was video tapping with Stephen, because he selling his family stuff like that, and he has Jack shoes. The most recent episode is about Stephen going to sell random things in his house at a swap meet. Jack took the keys and acted like he didn't threw them, so Stephen went in the yard looking for them. Jack went inside with the keys, and locked Stephen out of the house. Jack was looking outside the window to see Stephen was digging the snow, you can hear when David says "Oh, you're getting out of the tram, squirrel boy." Stephen just had run off and the dog was barking. 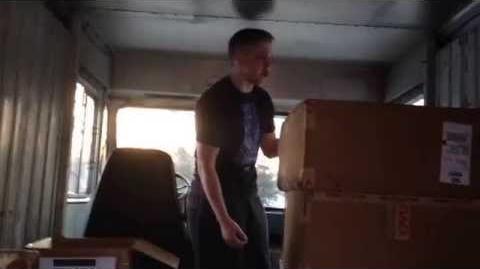 Greatest freakout ever 31 (ORIGINAL VIDEO)
Add a photo to this gallery
Retrieved from "https://greatest-freak-out-ever.fandom.com/wiki/Greatest_freak_out_ever_31?oldid=23937"
Community content is available under CC-BY-SA unless otherwise noted.