Stephen comes home from military school but hasn't been freaking out, albeit Jack returns home from a day at school only to discover that someone had made a mess from in the backyard (presumably Stephen). Stephen is seen in the distance in his boxers, Jack calls out for him only for Stephen to shout back: "I SAW BLOOD!" Jack investigates more of the chaos that was caused by him. Jack tells his brother, but he can't do this until you can hear when Stephen yells "I KNOW, JACK, WHATEVER!!", including his laptop sitting on the grass; Stephen continues to run off to pass the tree line. Jack then concludes that he'd might not or his family for that matter to see Stephen in over a long time. 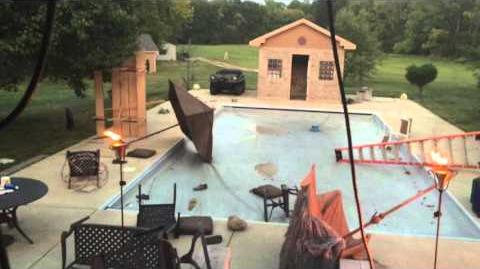 Greatest freakout ever 32 (ORIGINAL VIDEO)
Add a photo to this gallery
Retrieved from "https://greatest-freak-out-ever.fandom.com/wiki/Greatest_freak_out_ever_32?oldid=23940"
Community content is available under CC-BY-SA unless otherwise noted.