It's bow season today, and Stephen is getting his gear out of the attic, and Jack put his rooster "Sergeant Pepper" and other chickens outside of his den, and when Stephen comes to get his bow, he baits the door with chicken feed, and the key is on the rooster's neck, then when Stephen tries to get the key, the rooster attacks him, Stephen trips and falls. The rooster has no key, but it was Jack has it, Stephen couldn't open the door until he said "Did you lock this door or something?" and Stephen was afraid of rooster. Jack hides behind a car nearby filming Stephen's shenanigans while Stephen doesn't seem to strike back his brother as he tries to get the key from the rooster until it suddenly attacks, sending Stephen to the ground screaming. 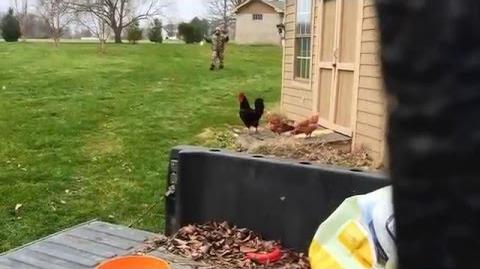 Greatest freak out ever 33 (ORIGINAL VIDEO)
Add a photo to this gallery
Retrieved from "https://greatest-freak-out-ever.fandom.com/wiki/Greatest_freak_out_ever_33?oldid=24145"
Community content is available under CC-BY-SA unless otherwise noted.