Stephen tries his hand at becoming a painter

Stephen tries his hand at becoming a painter. Jack walks into the living room where he sees his brother Stephen painting a picture, while muttering to himself. Stephen utterly turns around not too long into the video and becomes shocked, but still confident to see his brother watching him. As Stephen continues with his masterpiece, the doorbell rings and Jack goes to answer it revealing to be their mother (Jennifer), who Stephen actually had left behind at their cousin Liam's house. Jack informs her that Stephen is painting in the living room, but once they walk into the room they find the whole place trashed (with the art supplies, Stephen had actually stolen) and Stephen, in the distance, already out the door and completely stripped out of his clothes. It's implied Stephen is into trouble and that Jack convinces to the mom that if Stephen doesn't return, they could sell his painting. 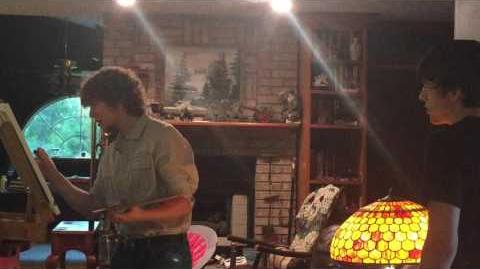 Greatest freak out ever 34 (ORIGINAL VIDEO)
Add a photo to this gallery
Retrieved from "https://greatest-freak-out-ever.fandom.com/wiki/Greatest_freak_out_ever_34?oldid=24295"
Community content is available under CC-BY-SA unless otherwise noted.