Stephen and his girlfriend are about to watch a movie together in his room, but Stephen wants to play World of Warcraft while they watch the movie. His girlfriend wants him to just watch the movie with her, and the two argue over him playing the game for several minutes. His girlfriend tries to grab his laptop from his hands, and then shoves what looks to be a cupcake into his face, smearing it on his shirt as well. An annoyed Stephen then climbs on the roof of his house from his window where Jack and Stephen's girlfriend try to coax him back to his room for several minutes. Jack goes on the roof where Stephen tries to get him down, and Stephen knocks the camera out of his hands, ending the episode. 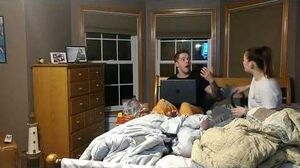 Greatest Freak Out Ever 36 (ORIGINAL VIDEO)
Add a photo to this gallery
Retrieved from "https://greatest-freak-out-ever.fandom.com/wiki/Greatest_freak_out_ever_36?oldid=24538"
Community content is available under CC-BY-SA unless otherwise noted.