Stephen is playing his dad's guitar, and Jack decides to have some fun with him. Jack leaves the camera pointed at Stephen, then goes outside and tells him: "Stephen! You suck at guitar!" Stephen tells Jack he doesn't care what he thinks and that he is better at playing guitar than him. Stephen continues playing until Jack tells him that their dad is going to be so mad when he finds out that Stephen is playing his guitar without permission. Stephen tells him he's not afraid of him and doesn't care if he finds out. Stephen then continues playing until Jack tells him he still sucks. Angry, Stephen tells him to shut up and that he doesn't have a life. Laughing, Jack goes back inside as Stephen tells him to "go get a freakin' life." Jack retrieves the camera and goes back outside to tell Stephen: "Dude, you freakin' suck at life." Stephen angrily responds by telling him to shut up and that he doesn't care what he thinks. Eventually, having had enough, Stephen charges toward the wall with the guitar and knocks the clock off the wall with it and then attempts to break it. He then smashes it multiple times on the porch until the guitar finally breaks. Stephen walks off the porch and to the side of the house as Jack follows him, laughing. 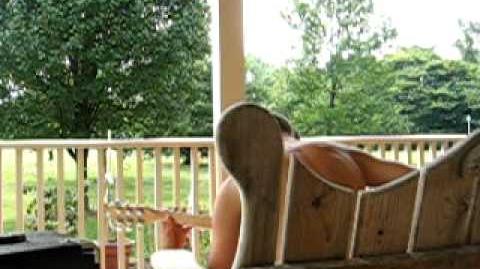 Greatest freak out ever 4 (ORIGINAL VIDEO)
Add a photo to this gallery
Retrieved from "https://greatest-freak-out-ever.fandom.com/wiki/Greatest_freak_out_ever_4?oldid=24499"
Community content is available under CC-BY-SA unless otherwise noted.