Stephen and Jack's parents are gone for the weekend, so their Grandma Betty is taking care of them. Jack says that Stephen and Betty had been arguing the entire time. He then focuses the camera on the two of them in the living room. Betty asks Stephen to hand her the TV remote so she can watch the news, but Stephen refuses to because nothing has happened lately. Betty asks him "How do you know if you never watch it?" Stephen responds with "Because you always update me like I care!" Betty calls Stephen a brat, and tells him he may be able to disrespect his parents, but he won't be able to with her. Stephen tells her that his father told him he's the "man of the house", but Betty denies this. Betty then asks why his father had her come stay in the first place, but Stephen insults her by saying "To make sure you don't get all crazy and crap and climb the roof." Betty tells him he's lying, and threatens to get her "paddle." After Stephen makes a sarcastic remark, Betty gets up, grabs her paddle, and proceeds to hit Stephen in the face with it. After hitting him in the eye, Betty decides she's had enough and prepares to leave the house. Stephen says he's calling his mother to tell her what Betty did to him, but Betty says she's calling her herself. As she leaves, Betty asks Stephen for the phone, but Stephen says he doesn't know where it is. In response, Betty insults him by saying "You got it up your ass, too?" Stephen says that's not funny, while Jack is heard laughing in the background. 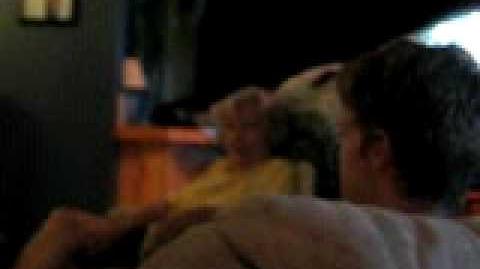 Greatest Freak Out Ever 6 (ORIGINAL VIDEO)
Add a photo to this gallery
Retrieved from "https://greatest-freak-out-ever.fandom.com/wiki/Greatest_freak_out_ever_6?oldid=24201"
Community content is available under CC-BY-SA unless otherwise noted.