Stephen is tasked with vacuuming the house, but he refuses to do so. Jennifer tells him he has 20 minutes before they need to leave for something, to which Stephen responds with "Oh, now the power supreme is timing me." After he starts vacuuming, Stephen starts smashing the vacuum into a chair. Jennifer tells him to stop, and Stephen proceeds to vacuum the rest of the living room. After complaining about the vacuum, the vacuum suddenly turns off and Stephen questions this. Jennifer tells him he needs to fix the hose, to which she does herself. After turning the vacuum back on, Stephen suddenly picks up the vacuum, smashes it on the floor twice, and breaks it. When Jennifer sees this, she yells at Stephen and tells him that "just because something doesn't work the way you want it to, you don't break it." She then leaves to find David and tell him what Stephen did. When David comes out and sees the broken vacuum cleaner, he threatens to beat up Stephen, causing Stephen to run outside to the backyard. Jack follows them outside, only to find Stephen being tackled by their dog, Rick. Stephen frantically tries to run away from him, but Rick keeps jumping on him while attempting to bite him. 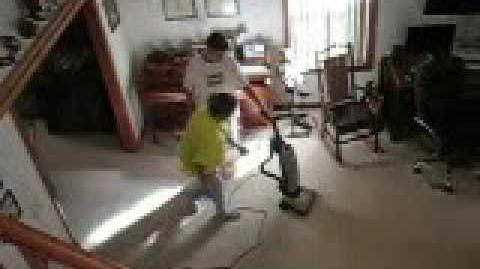 Greatest Freak Out Ever 7 (ORIGINAL VIDEO)
Add a photo to this gallery
Retrieved from "https://greatest-freak-out-ever.fandom.com/wiki/Greatest_freak_out_ever_7?oldid=24202"
Community content is available under CC-BY-SA unless otherwise noted.