Jack showed Stephen the "World of Warcraft" video, but he didn't get the reaction he was expecting. He mentions that Stephen's been up in a tree for the past 4 hours, then walks over to Stephen and tells him to get out of the tree, while also calling him "squirrel boy." Stephen tells him to stop calling him "squirrel boy", then says he won't get out of the tree because Jack embarrassed him at school because of the video. Jack tells him that "3,000,000 people want know why you shoved a remote up your butt." Stephen said he didn't and that he made it look like he did. Jack then shows Stephen his "boo bear" in an attempt to make him happy, but Stephen said he doesn't care about his bear anymore, stating that he played with it when he was 7. Jack then questions why he is in the tree in the first place, to which Stephen responds with "Because you made me freakin' mad!" Jack brings the camera closer to Stephen and calls him "squirrel boy" once again. Having enough, Stephen yells out "QUIT calling me squirrel boy!" and hits the camera to the ground. 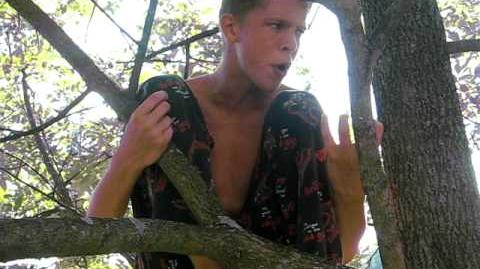 Greatest freak out ever (The After Math) ORIGINAL VIDEO
Add a photo to this gallery
Retrieved from "https://greatest-freak-out-ever.fandom.com/wiki/Greatest_freak_out_ever_aftermath?oldid=24095"
Community content is available under CC-BY-SA unless otherwise noted.