"Judging Animation Contest" is a deleted Greatest Freak Out Ever episode from short.

Jack is telling the viewers that ADA Sport, the same people that may have seen his channel that he worked with on some animations ask him to judge. In the background, Stephen is yelling at his mom that he wants to go to a dance but his mom won't let him. The two videos Jack is judging are named "Realistic Captain America" and "Web Geezers". 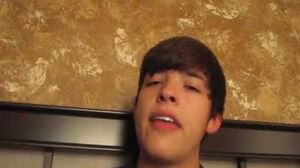 Judging Animation Contest
Add a photo to this gallery
Retrieved from "https://greatest-freak-out-ever.fandom.com/wiki/Judging_Animation_Contest?oldid=23741"
Community content is available under CC-BY-SA unless otherwise noted.